In early March of 1949, a small group of men who were concerned about the lack of fire protection in the Alberta area held a meeting and decided to organize a volunteer fire group to fight local fires. Several days later. John Thomas Avery, Jr. and J.R. Orgain, Jr., along with others, discussed the need for a fire department with some thirty businesses in the area.

All of the local businesses showed strong support for such an idea. Within a week, after a local survey of the citizens, the group started recruiting interested and able men to become volunteer firefighters.

On April 21, 1949, the Alberta Volunteer Fire Department was formally created by the Alberta Town Council. The first Fire Chief was John Thomas Avery and the department consisted of 35 charter members.

The first fire station was constructed in November 1953. It was used until the new station opened on May 26, 2001.

After 66 years of serving the public, the department has expanded its service to include emergency medical service and extrication to traffic accident victims, as well as hazardous materials control and terrorism response. 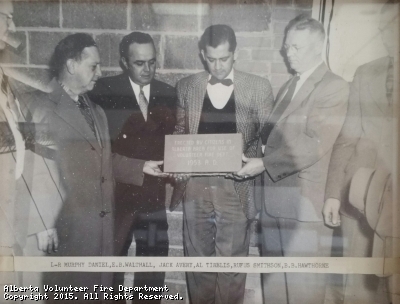 The first fire station was constructed in November 1953